Transcoding can take up around 10% of your time in the edit. This Best Practice guide explains how to save time with Adobe Premiere Pro using native format workflows, including your options for ensuring performance in almost all situations.

Video editing always starts with one class of file formats (camera capture) and ends with a different type of formats, designed for consumption. With capture formats, the priority is to preserve quality. With deliverables, the priority is compression – with as much quality as possible. The editor lives between these two worlds. Knowing how to navigate from camera source media to final output can save an incredible amount of time and stress. In this Best Practices guide, we explore the native format workflows, how (and when) to optimize your media, and how to get from A to B efficiently.

There are two basic approaches for bringing footage into Premiere Pro: Import and Ingest.

When you import media, you are telling Premiere Pro that these files are part of your project. Premiere Pro plays your files from their original locations and you can use them in your Sequence. All of your edits and effects are applied (non-destructively) in the Timeline: The original files (aka source media) are not touched. When you are ready to export, Premiere Pro references the original files, applying your edits, effects, graphics and audio adjustments to generate a new file: the finished output.

When you ingest media, Premiere Pro creates a copy of that file. It could be a straight copy, a mezzanine media file (using a post-production friendly codec), or a proxy file.

An editor works with at least two versions of any video file: the source files (the “native” media) and the output. In between, you many also work with a mezzanine codec, proxies, or pre-rendered Previews. Click on the terms below for more details.

If you could only edit native formats, you probably would. Your workflow is simple: import your footage review the shots, build your sequence, edit until satisfied, and export the results. Even if you are able to work with native formats most of the time, understanding your options means you can stay efficient with almost any content.

Transcoding refers to the process of creating a copy of your file, generally for better playback. Transcodes are the same frame rates and frame sizes but use a format which plays back better on your system. For example, mobile phone footage (H264 or HEVC) can be quite processor intensive so you may elect to transcode to a codec, such as ProRes or DNx, for shorter projects, it may not be worth the time to transcode.

Proxies are lightweight copies of your source files. For example, one minute of ProRes 4-K footage could easily be several GB of data. A proxy copy of that footage might only be a few 100 MB. Premiere Pro allows you to create proxies during ingest, which means you can start editing right away using the source media while Premiere generates the proxies in the background. Once the proxies are complete, Premiere automatically replaces the source files with the proxies. You can toggle back and forth between the source files and the proxies, but that’s not necessary: all the edits and effects you add to your footage are applied to the source files for your export.

Rendering is when you combine Effects with your footage during editing. You do this to maintain real-time playback if your system starts slowing down. You can “render as you go” with Premiere Pro by creating Previews of a clip, or a part of your Sequence.

Previews are “disposable” render files that speed up playback during your edit. If a section of your Timeline has a red line above it (instead of yellow), it means that Premiere Pro is using the CPU to process that section or clip. If playback is choppy, you can fix this by creating a Preview (choose Sequence menu > Render Effects In to Out). You can also choose Render In to Out to render everything in the section (not just the Effects). This takes a moment, so it’s great to do during coffee breaks, but it has a huge hidden benefit: Previews dramatically speed up encoding process at the end of your project because Premiere Pro has already done all the math for that section of your Timeline.

Encoding is about compression for your final output. You may start a project with hundreds of Gigabytes of footage. Your edited project probably only has a fraction of that content, but it’s still too much data for distribution and it’s not optimized for playback. Encoding takes all the media on your Timeline, including all the Effects, graphics, and audio and compresses it for and optimal balance of file size and media quality.

Mezzanine codecs are post-production formats, such as the Apple ProRes, Avid DNxHD/R, and GoPro Cineform codec families. These codecs are designed to retain the image quality and details from your source footage but optimized for better playback. Broadcasters and postproduction facilities generally standardize on mezzanine formats to streamline their workflows, but it does mean transcoding their footage before they can start.

How long does transcoding take?

Transcoding time is typically 1:1: meaning one hour of source footage takes about one hour to transcode. If you have one hour of footage to work with in an 8-hour day, using Premiere Pro’s support for native formats saves around 10% of your time. This is true whether you work with the native files, or use background transcoding.

As we’ve discussed, native format workflows are the simplest. For many projects, such as shorter content with fewer different types of media, native workflows in Premiere Pro are the quickest way to work.

But what if they’re not? Some formats, such as high-resolution media or mobile phone footage, are more work for your editing system to play back. If you have a mixed timeline with media from different types of cameras, you’re asking Premiere Pro to do numerous different types of processing. The reality is, when working with limited system hardware, storage speed, and available work time, there is always a “sliding scale of efficiency.” At a certain point, it becomes worthwhile to transcode.

There are two typical scenarios where transcoding may make sense:

If you do transcode your media, the most efficient approach is to use a codec that supports Smart Rendering in Premiere Pro. For more information, see Best Practices: Export faster.

Transcoding to a single unified codec and format can be helpful when working with a large group of collaborators. It simplifies the workflow when incorporating multiple creative applications (not all of which may be as flexible as Premiere Pro in native formats). When transcoding to a codec intended for post-production, performance generally improves.

When working on long form projects, with teams working on different parts of post-production using shared storage, there is often more time for transcoding. In fact, some productions have a dedicated digital imaging technician on-location performing transcodes and organizing media files before they reach the editor.

There are two primary workflows for transcoding:

For the purposes of this document, “transcoding” means changing the codec used to store the video and audio information while keeping the original frame size and frame rate. The transcoded footage becomes the Master version of the media throughout the rest of the workflow. As masters, this footage is now treated as source media by Premiere Pro and used for output.

As mentioned earlier, proxy workflows (which are also robust) use a temporary version of the media to lessen the hardware demands purely for editorial. While exporting the final output, the system does not reference these files.

The Premiere Pro Project Ingest settings can be configured to transcode all media when it is imported. The setup process is a little involved, but if you need to transcode, it’s worth it. Because Premiere Pro supports such a wide range of native formats, you usually are able to begin editing using the original native source media, without waiting for the transcoding process to complete. It goes without saying this is a huge time-saver!

As the transcodes are completed, the clips are automatically relinked to the new versions of the media. The relinking happens behind the scenes and you don’t have to change anything while you’re editing, unless you want to toggle back to see your source media.

Adobe Media Encoder launches automatically to perform transcodes in the background. Progress can be viewed in Adobe Media Encoder. Because it’s a separate application, it has little impact on your work in Premiere Pro. 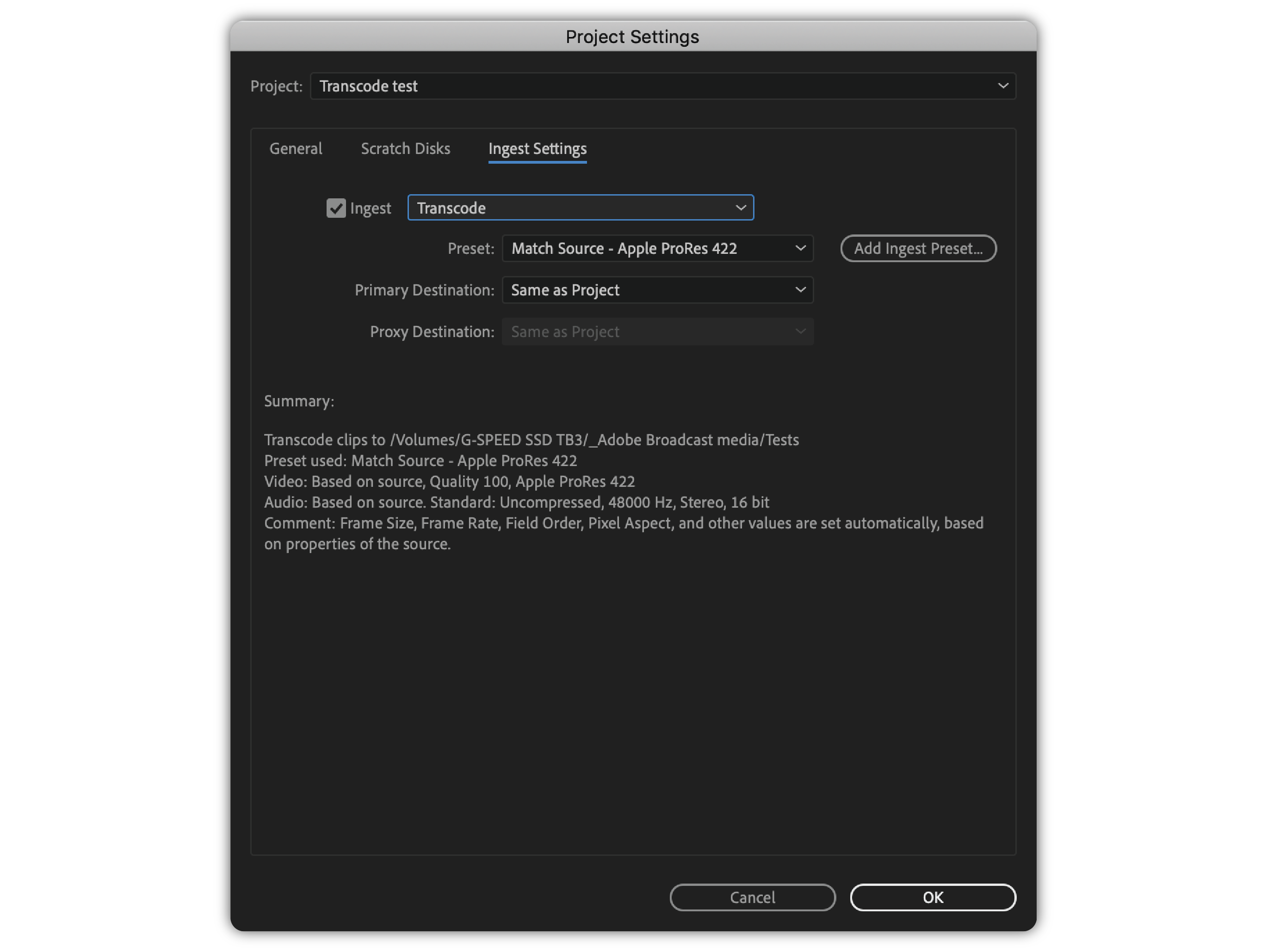 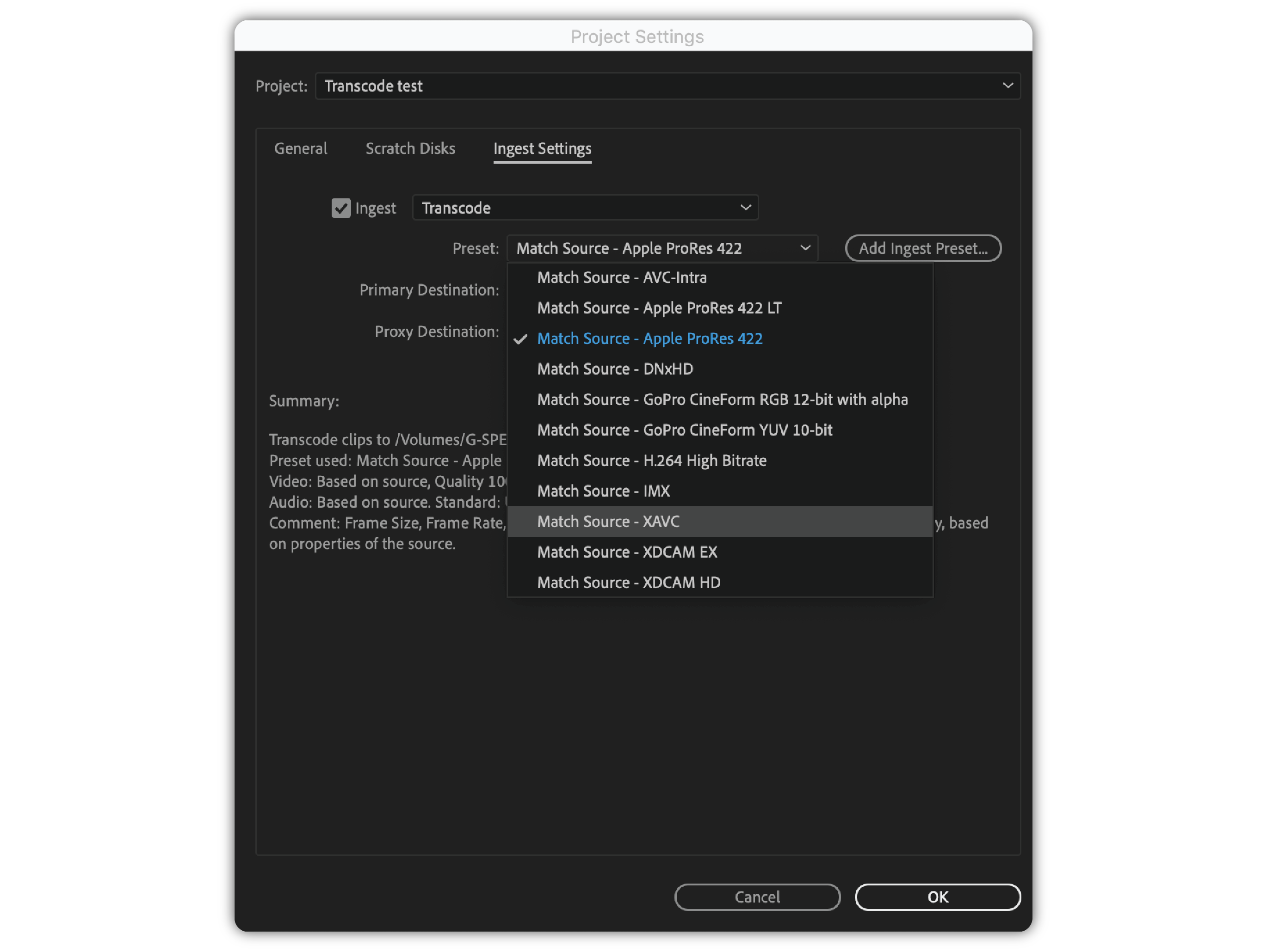 If the Ingest options are enabled, when new media is imported, Adobe Media Encoder launches in the background. You can also view progress via the Progress panel in Premiere Pro.

By default, transcoding is paused when during video playback in Premiere Pro to improve performance. You can change this option in the Premiere Pro user preferences.

Adobe Media Encoder can be set up on a difference computer system.

Using Watch folders, new media files can automatically be transcoded and placed in a target directory.

The editor or assistant editor can then add that media to Adobe Premiere Pro.

The existing presets are built targeting clips with two audio tracks but other audio configurations can be set by creating a preset in Adobe Media Encoder, which can be imported into Premiere Pro.

Premiere Pro’s native file support can be a life-saver for late-arriving media and many projects can be completed all-native. Understanding your options means that you can manage your media and complete your edit efficiently.

The companion piece to this article is focused on Exports. For more information, see Best Practices: Export faster.

About these Best Practice guides

Adobe helps you get to the finish line faster. See our Best Practice guides for video editing and production: