When you export PDFs to different file formats using the Export PDF tool in Acrobat, each file format includes unique conversion settings. To view the various formats to which you can export the PDF in Acrobat, see Tools > Export PDF. 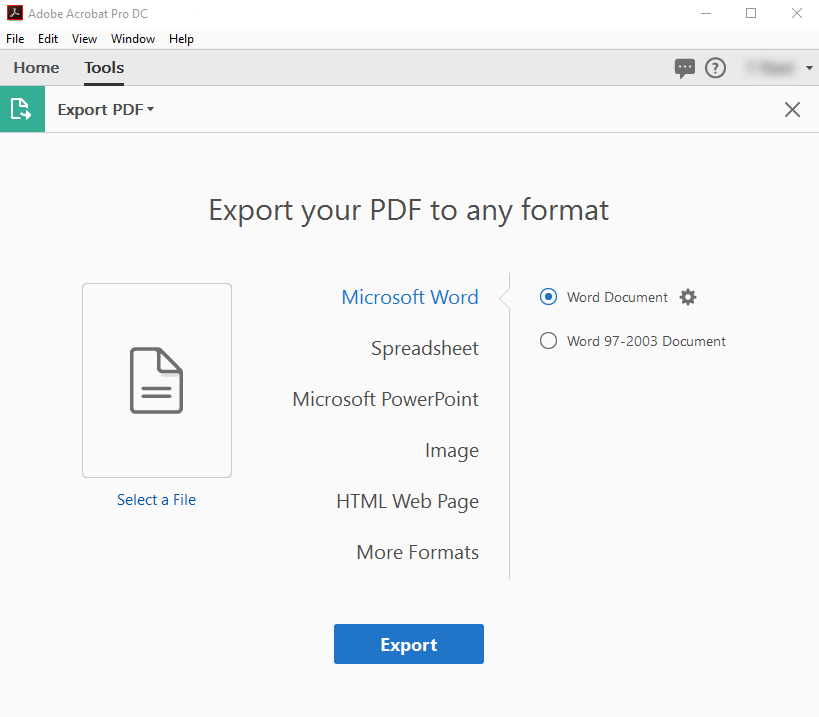 If you want to use the same settings every time you convert PDFs to a particular format, specify those settings in the Preferences dialog box. In the Convert From PDF panel, select a file format from the list, and click Edit Settings. (Click the Restore Defaults button at any time to revert to the default settings.)

If your PDF contains a collection of images, you can export them individually as JPEG, PNG, or TIFF files by choosing Tools > Export PDF > Image > Export All Images.

Note that the options available depend on whether you are exporting a document to JPEG or JPEG 2000. 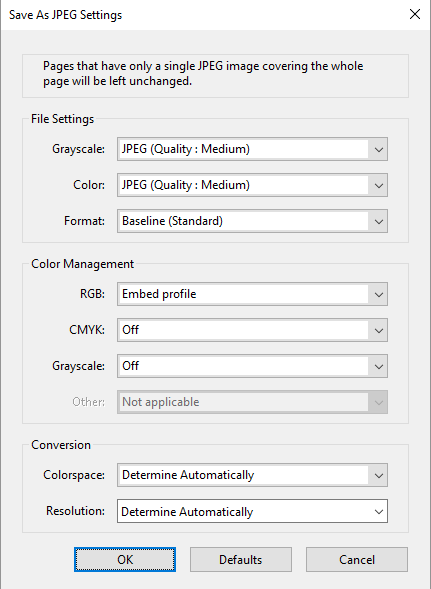 Specifies the type of color management to be applied to the output file and whether to embed an ICC profile.

If you use the Export To or Export All Images command on a PDF that contains JPEG and JPEG 2000 images, and export the content to JPEG or JPEG 2000 format, the resulting image may look different when opened in Acrobat. This can happen if the images have a color profile included at the page level but not inside the image data. In this case, Acrobat cannot bring the page-level color profile into the resulting saved image.

PNG format is useful for images that are used on the web. 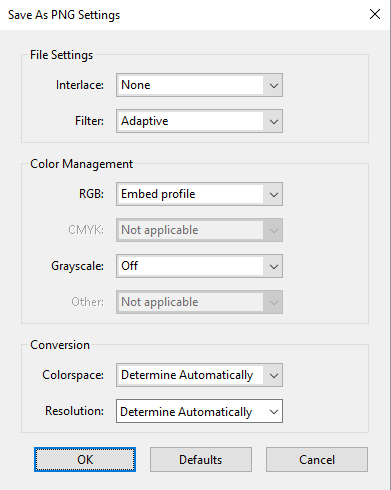 Specifies the type of color management for the output file and whether to embed an ICC profile.

TIFF is a flexible bitmap image format supported by virtually all paint, image-editing, and page-layout applications. Resolution is determined automatically.

Some applications cannot open TIFF files that are saved with JPEG or ZIP compression. In these cases, LZW compression is recommended.

Specifies the type of color management for the output file.

You can export a PDF to Word format (DOCX or DOC) or Rich Text Format (RTF). In Acrobat, go to Tools > Export PDF  and select Microsoft Word or Word 97-2003 Document. The following options are available when you click on the 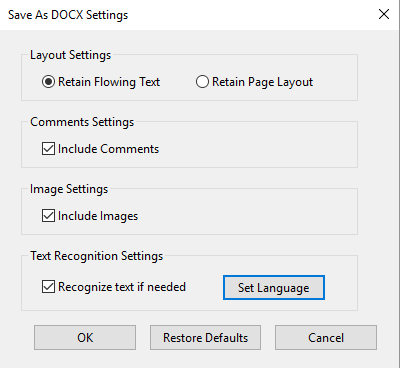 The following options are available when you click on Advanced Settings: 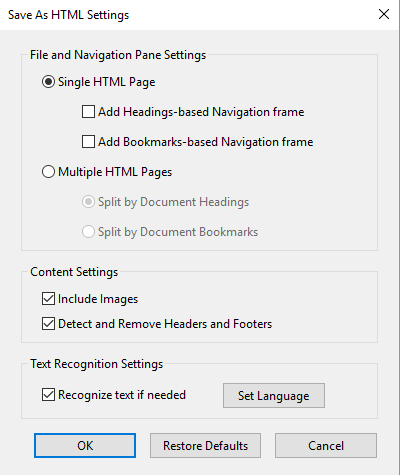 Specifies that a single HTML file is created when you export to HTML. To add a navigation pane, enable the following:

Specifies if images are exported when you export a PDF as HTML.

Detect and Remove Headers and Footers

Specifies if header and footer content in the PDF should be deleted and removed from the HTML files.

In Acrobat, go to Tools > Export PDF  and select Microsoft Excel Workbook or XML Spreadsheet 2003. The following options are available when you click on the 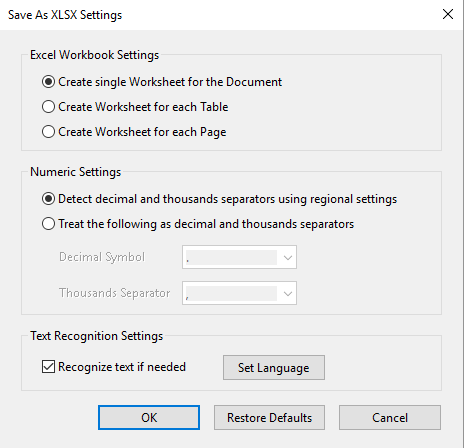 Specifies whether to create a Worksheet for each table or page, or the entire document.

Specifies the decimal and thousands separators for numeric data. Select one of the following:

You can export a PDF to PostScript® for use in printing and prepress applications. The PostScript file includes full DSC (Document Structuring Conventions) comments and other advanced information preserved by Adobe Acrobat Distiller®. You can also create an EPS file from any PDF for placement or opening in other applications. The options available depend on whether you are converting a document to PostScript or EPS.

If you are creating EPS files for separations in Acrobat Pro, all image color spaces should be CMYK.

ThePostScript Printer Description (PPD) provides the necessary information to format a PostScript file correctly for a particular output device. Device Independent creates only composite (not color-separated) PostScript or EPS files. Acrobat Default provides a starting point and reference for creating all types of PostScript and restores all default settings for the conversion. Adobe PDF 7.0 is compatible with most devices. This option is available only for PostScript (PS) format.

Specifies the output format of image data. Binary output yields smaller files, but not all workflows can accommodate binary output.

Preserves the appearance of comments in the resulting PostScript file.

Specifies if a TIFF preview is created for the resulting EPS file. This option is not available when saving as PostScript.

Specifies the pages you want to export. When you export files to EPS output, each page in the range is saved as a separate EPS file.

You can export from PDF to Text and XML formats. In Acrobat, go to Tools > Export PDF > More Formats  and select Text (Acessible) or Text (Plain) or XML 1.0 as required. 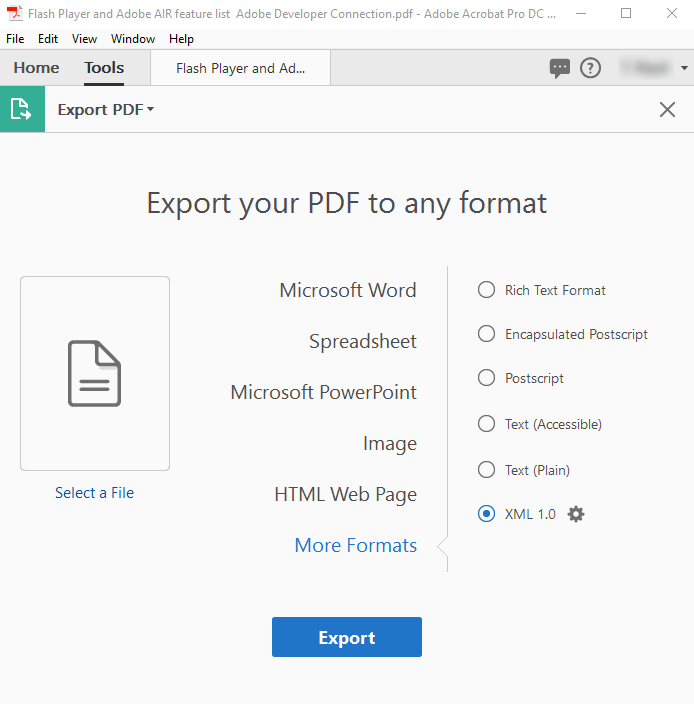 The following options are available when you click on the XML 1.0 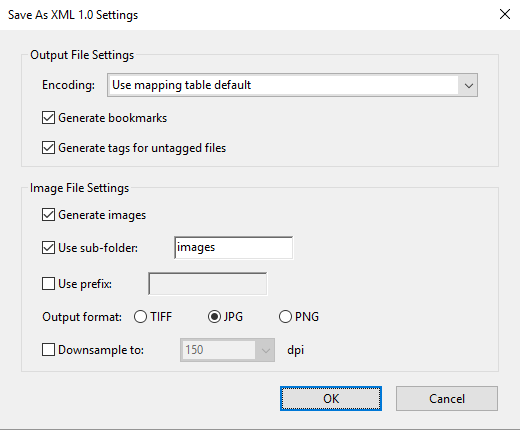 Generates tags for files that are not already tagged, such as PDFs created using Acrobat 4.0 or earlier. If this option is not selected, untagged files are not converted.

Tags are applied only as part of the conversion process and are discarded after the conversion. This is not a method for creating tagged PDFs from legacy files

Controls how images are converted. Converted image files are referenced from within XML and HTML documents.

Specifies the folder in which to store generated images. The default is Images.

Specifies the prefix added to the image filenames if you have several versions of the same image file. Filenames assigned to images have the format filename_img_#.

Specifies the final format of images. The default is JPG.

Downsamples image files to the specified resolution. If you do not select this option, image files have the same resolution as in the source file. Image files are never upsampled.