In digital photography, a picture is captured by a camera's image sensor in an image file. An image file is generally processed and compressed, before being stored on your camera's memory card. However, cameras can also store a picture without processing or it—as a raw file. Think of camera raw files as photo negatives. You can open a raw file in Photoshop Elements, process it, and save it, rather than relying on the camera to process the file. Working with camera raw files lets you set the proper white balance, tonal range, contrast, color saturation, and sharpness.

To use raw files, set your camera to save files in its own raw file format. When you download the files from the camera, they have filename extensions like NEF, CR2, CRW, or other raw formats. Photoshop Elements can open raw files only from supported cameras.

What Process Version is applied to my raw image?

Note: If not using Process Version 2012, an icon displayed below the raw image indicates that an older version is being used.

Can I switch between Process Versions?

Yes. In the Camera Raw 9.1 dialog box, click the Camera Calibration tab, and select the Process Version you want to use from the Process drop-down list.

Which version is best for you?

Process Version 2012 enables you to work with the latest enhancements in the raw format. However, if you have many raw images that were opened with previous editions of Photoshop Elements (and hence using older Process Versions), you may choose to apply an older Process Version to your newer raw images. This helps with consistency while processing past and present images, and helps maintain your older workflow.

What are the differences in the Process Versions? 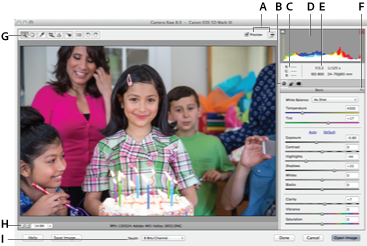 The Sharpness slider adjusts the image sharpness to provide the edge definition you want. The Sharpness adjustment is a variation of the Adobe Photoshop Unsharp Mask filter. This adjustment locates pixels that differ from surrounding pixels based on the threshold you specify, and increases the pixels’ contrast by the amount you specify. When opening a camera raw file, the Camera Raw plug‑in calculates the threshold to use based on the camera model, ISO, and exposure compensation. You can choose whether sharpening is applied to all images or to previews.

When making Luminance Smoothing or Color Noise Reduction adjustments, preview images at 100% for a better view. 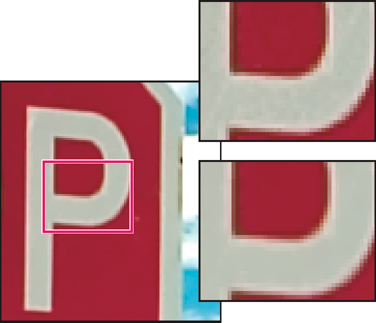 Save changes to camera raw images

You can save changes you’ve made to a camera raw file. The Camera Raw dialog box saves the camera raw image with your changes in a .dng file. Saving the file does not automatically open it in Photoshop Elements. (To open a camera raw file, use the Open command. Then you can edit and save the file like any other image.)

Open a camera raw image in the Edit workspace

After you process a camera raw image in the Camera Raw dialog box, you can open the image and edit it in the Edit workspace.

Sets the area you click to a neutral gray tone to remove color casts and adjust the color of the entire image. The Temperature and Tint values change to reflect the color adjustment.

Removes part of an image. Drag the tool within the preview image to select the portion you want to keep, and then press Enter.

You can use the Straighten tool to realign an image vertically or horizontally. This tool also resizes or crops the canvas to accommodate straightening the image.

Removes red eye in flash photos of people and green or white eye in pets.

Rotates the photo either counterclockwise or clockwise.

When you open a camera raw file, Photoshop Elements reads information in the file to see which model of camera created it, and then applies the appropriate camera settings to the image. If you are always making similar adjustments, you can change the default settings of your camera. You can also change settings for each model of camera you own, but not for multiple cameras of the same model.