Layers are useful because they let you add components to an image and work on them one at a time, without permanently changing your original image. For each layer, you can adjust color and brightness, apply special effects, reposition layer content, specify opacity and blending values, and so on. You can also rearrange the stacking order, link layers to work on them simultaneously, and create web animations with layers.

Layers are like stacked, transparent sheets of glass on which you can paint images. You can see through the transparent areas of a layer to the layers below. You can work on each layer independently, experimenting to create the effect you want. Each layer remains independent until you combine (merge) the layers. The bottommost layer in the Layers panel, the Background layer, is always locked (protected), meaning you cannot change its stacking order, blending mode, or opacity (unless you convert it into a regular layer). 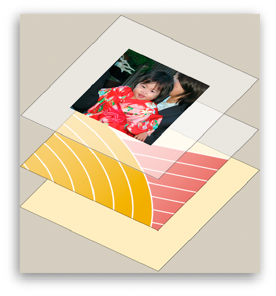 Transparent areas on a layer let you see through to the layers below.

Layers are organized in the Layers panel. Keep this panel visible whenever you’re working in Adobe Photoshop Elements. With one glance, you can see the active layer (the selected layer that you are editing). You can link layers, so they move as a unit, helping you manage layers. Because multiple layers in an image increase the file size, you can reduce the file size by merging layers that you’re done editing. The Layers panel is an important source of information as you edit photos. You can also use the Layer menu to work with layers.

Ordinary layers are pixel-based (image) layers. There are several other layer types you can use to create special effects:

Enable you to fine-tune color, brightness, and saturation without making permanent changes to your image (until you flatten, or collapse, the adjustment layer).

You can’t paint on an adjustment layer, although you can paint on its mask. To paint on fill or type layers, you must first convert them into regular image layers.

About the Layers panel

The Layers panel (Window > Layers) lists all layers in an image, from the top layer to the Background layer at the bottom. In Expert mode, if you are working in the Custom Workspace, you can drag the Layers panel out and tab it with other panels.

The active layer, or the layer that you are working on, is highlighted for easy identification. As you work in an image, check which layer is active to make sure that the adjustments and edits you perform affect the correct layer. For example, if you choose a command and nothing seems to happen, check to make sure that you’re looking at the active layer.

Using the icons in the panel, you can accomplish many tasks—such as creating, hiding, linking, locking, and deleting layers. With some exceptions, your changes affect only the selected, or active, layer, which is highlighted. 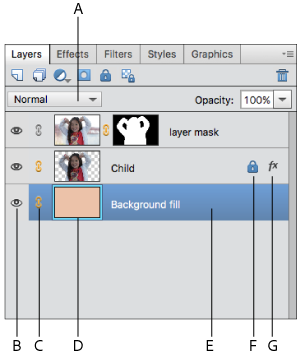 In the list of layers, the panel shows a thumbnail, a title, and one or more icons that give information about each layer:

The layer is visible. Click the eye to show or hide a layer. When the layer is hidden, the icon is

. Hidden layers are not printed.

The layer is linked to the active layer.

The layer is locked.

The image contains layer groups and was imported from Adobe Photoshop. Photoshop Elements doesn’t support layer groups and displays them in their collapsed state. You must simplify them to create an editable image.

You use the buttons in the panel to perform actions:

Also at the top are the panel Blending Mode menu (Normal, Dissolve, Darken, and so on), an Opacity text box, and a More button displaying a menu of layer commands and panel options.

Newly added layers appear above the selected layer in the Layers panel. You can add layers to an image by using any of the following methods:

Create a new layer from part of another layer

You can move part of an image from one layer to a newly created one, leaving the original intact. 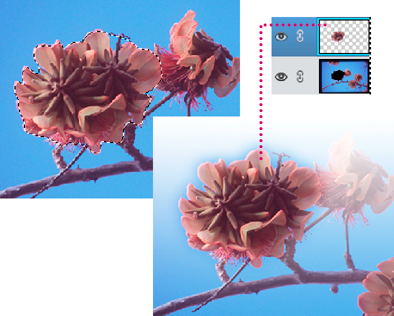 Convert the Background layer into a regular layer

Make a layer the Background layer

You can create a new group to prevent cluttering and organize the layers. Do one of the following:

Color-coding layers and groups helps you to identify related layers in the Layers panel. Simply right-click the layer or group and select a color.