Update to After Effects CC available.

This document describes the new and updated features in the After Effects CC (December 2013) release.

Migrating your settings from a previous minor version of After Effects

The following settings are migrated:

When you start After Effects CC for the first time with default settings, After Effects will automatically initiate the settings migration process.

A new element, Project Folder, has been added to the Add Property menu under the File Name and Location template.

To choose this element:

For example, the template [projectFolder]/output/final_[compName].[extension] specifies the following:

When you choose the Project Folder element, the output file is placed in the same folder as the one in which the project is saved.

When you specify an output file name and location through the Output Movie To dialog box, you can choose the Save In Subfolder option to create a subfolder at the time of output.
The Save in Subfolder option works in combination with the new path support in the templates. Therefore, adding a folder in this field will add the folder to the template, and vice versa. 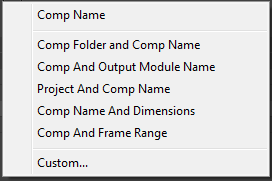 Note the following additional changes to the template functionality:

You can now snap together the following features by dragging them in the Composition panel:

When you click near a shape layer path, After Effects will use a point on that path that is nearest to where you clicked as the snapping point. This behavior is similar to the way it is with masks.

See the Changes to snapping to align layers in 2D and 3D and Snap Layers in Composition panel for details about the snapping features that were introduced in previous versions of After Effects.

Snap a light layer to a camera layer, so that you can effectively 'look through' a light or simply illuminate wherever your camera is pointing.

Suppose that you opened a project and had a volume with footage that was not mounted. With After Effects 12.2, you can context-click on a footage item in the project and choose Reload Footage. All footage on the remounted volume is found automatically as long as the footage is in the same location as before.

Previously, if the volume was mounted after the project was opened, you had to close and re-open the project or double-click a missing footage item and find it manually.

Changes to location of installed scripts

In After Effects 12.2, if you drag and drop a script (.jsx or .jsxbin) file onto the Project panel, the script is copied to the following user location:

Relaunch After Effects to see the scripts (that are located in the user space) under the File > Scripts submenu.

However, the preferred location for the scripts is in the folder next to the application itself. If you want to explicitly copy scripts to this folder, ensure that you have administrator privileges.

After Effects loads scripts from both the above locations. See the Scripts article for additional information.

If you uninstall the After Effects application and choose to Remove Preferences during uninstallation, any installed scripts that are located in the user’s Scripts folder will be deleted.