Jeff Almasol provides a script on his redefinery website that renders and exports each of the selected layers separately. For example, use this script if layers represent different versions of an effect or different parts of an effect that you want to render as separate passes for flexibility in how they get composited.

The source footage item is selected in the Project panel.

Jeff Almasol provides a script on his redefinery website that automatically writes specified information about footage items or layers to the Comment fields for the respective items in the Project panel or Timeline panel.

Layer switches and columns in the Timeline panel

Many of characteristics of a layer are determined by its layer switches, which are arranged in the Timeline panel in columns. By default, the A/V Features column appears to the left of the layer name, and the Switches and Modes (Transfer Controls) columns appear to the right, but you can arrange columns in a different order. (See Columns.)

To show or hide columns in the Timeline panel, click the Layer Switches

button in the lower-left corner of the Timeline panel. Press Shift+F4 to show or hide the Parent column. Press F4 to toggle the Switches and Modes columns.

The results of some layer switch settings depend on the settings of composition switches, which are in the upper right of the layer outline in the Timeline panel.

Quickly change the state of a switch for multiple layers by clicking the switch for one layer and dragging up or down that column for the adjacent layers.

Jeff Almasol provides a script on his redefinery website that creates a panel with which you can save and restore the layer switch settings for all layers in a composition.

Switches in the A/V Features column

Toggles layer visuals on or off. (See Toggle visibility or influence of a layer or property group.)

Toggles layer sounds on or off.

Includes the current layer in previews and renders, ignoring layers without this switch set. (See Solo a layer.)

Switches in the Switches column

is selected. (See Show and hide layers in the Timeline panel.)

Collapses transformations if the layer is a precomposition; continuously rasterizes if the layer is a shape layer, text layer, or layer with a vector graphics file (such as an Adobe Illustrator file) as the source footage. Selecting this switch for a vector layer causes After Effects to rerasterize the layer for each frame, which improves image quality, but also increases the time required for previewing and rendering. (See Render order and collapsing transformations and Continuously rasterize a layer containing vector graphics.)

Toggles between Best and Draft options for layer quality for rendering, including rendering to the screen for previews. (See Layer image quality and subpixel positioning.)

Select to render the layer with effects. The switch does not affect the setting for individual effects on the layer. (See Delete or disable effects and animation presets.)

Sets frame blending to one of three states: Frame Mix

, or off. If the Enable Frame Blending composition switch

is not selected, the frame blending setting of the layer is irrelevant. (See Frame blending.)

Toggles motion blur on or off for the layer. If the Enable Motion Blur

composition switch is not selected, the motion blur setting of the layer is irrelevant. (See Motion blur.)

Identifies the layer as a 3D layer. If the layer is a 3D layer with 3D sublayers—as is the case for a text layer with per-character 3D properties—the switch uses this icon:

Toggle visibility or influence of a layer or property group

Several components of layers—such as paint strokes, path operations in shape layers, and text animators in text layers—each have their own Video switches. You can use the Video switch to toggle the visibility and influence of these items individually.

You can isolate one or more layers for animating, previewing, or final output by soloing. Soloing excludes all other layers of the same type from being rendered—both for previews in the Composition panel and for final output. For example, if you solo a video layer, any lights and audio layers are unaffected, so they appear when you preview or render the composition. However, the other video layers do not appear.

Lloyd Alvarez provides a script on his After Effects Scripts website with which you can tag layers and then select, shy, and solo layers according to their tags. The tags are appended to comments in the Comments column in the Timeline panel.

Lock or unlock a layer

The Lock switch prevents layers from being edited accidentally. When a layer is locked, you cannot select it in either the Composition or Timeline panels. If you try to select or modify a locked layer, the layer flashes in the Timeline panel.

When a layer is locked, the Lock icon

appears in the A/V Features column, which appears by default to the left of the layer name in the Timeline panel.

You can use labels (colored boxes in the Label column) in the Project panel and Timeline panel to organize and manage compositions, footage items, and layers. By default, different label colors indicate different kinds of footage items, but you can assign label colors to indicate whatever categories you choose.

Rename label groups to help you to organize and categorize layers and footage items. To see label names in the Label column, widen the column to greater than the default width.

Show and hide layers in the Timeline panel

Shy layers are still rendered, both for previews and for final output. To exclude layers from previews or final output, use the Video switch or make the layer a guide layer.

Lloyd Alvarez provides a script on his After Effects Scripts website with which you can tag layers and then select, shy, and solo layers according to their tags. The tags are appended to comments in the Comments field in the Timeline panel.

The quality setting of a layer determines how precisely it is rendered, as well as influencing the precision of other calculations involving the layer, such as motion tracking and the use of the layer as a control layer for a compound effect.

Duplicated or split layers retain the Quality setting of the original layer.

To toggle between Best (bilinear sampling), Draft, and Best (bicubic sampling) quality of selected layers, click the Quality switch in the Timeline panel. To choose from all these options plus the Wireframe option, choose Layer > Quality:

Displays and renders a layer using subpixel positioning, anti-aliasing, 3D shading, and complete calculation of any applied effects. Best requires the most time for rendering—both for previews and for final output.

Displays a layer so that you can see it, but only at rough quality. Draft quality displays and renders a layer without anti-aliasing and subpixel positioning, and some effects are not precisely calculated.

Displays a layer as a box, without layer contents. Layer wireframes are displayed and rendered faster than layers rendered with Best or Draft settings.

For layers with quality set to Best, you can choose between bicubic and bilinear sampling. This per-layer setting determines how pixels are sampled for transformations such as scaling.

Textures in the ray-traced 3D renderer do not use bicubic sampling; they always use bilinear sampling. Transformations within effects also still use bilinear sampling, unless the effect specifically implements another method (as with a dedicated scaling plug-in effect or distortion effect).

Property values (like Position and Anchor Point) in After Effects are not restricted to integer values; they can have fractional values, too. This allows for smooth animation, as a value is interpolated from one keyframe to another. For example, if a Position value goes from [0,0,0] at a keyframe at time 0 to a value of [0,0,80] at time 1 second in a 25-frames-per-second composition, then the value at frame 1 is [0,0,3.2].

After Effects calculates all spatial values, like Position and effect control points, to a precision of 1/65,536 of a pixel. This is called subpixel precision.

If the pixels of a layer aren't positioned directly on the pixel boundaries of the composition, a small amount of blur occurs—very similar to anti-aliasing. This blur is not a problem for an object in motion, because objects in motion have motion blur, but it can soften fine details in a static image. Also, if an image is moving slowly or at just the wrong speed, the image can appear to oscillate between sharpness and blurriness.

Because the default anchor point for a layer is the center of an object, odd-sized objects have non-integer anchor points and appear soft when positioned at integer values. To minimize blurriness and in-and-out of focus result, follow these guidelines:

Whether or not you continuously rasterize, if you view and render a composition using Best Quality, After Effects anti-aliases (smooths) the vector graphics. 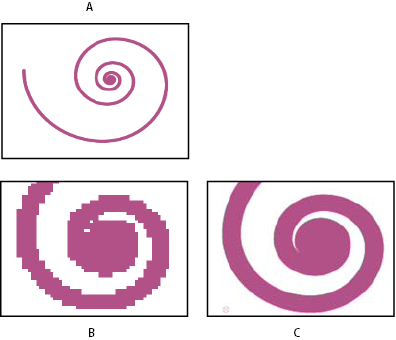