Import 360° or 180° media into Premiere Pro, edit your project, then share your video in monoscopic or stereoscopic format. While editing, monitor your project on-screen, or with a VR headset.

To edit 360° or 180° video, make sure your system meets the VR system requirements. If you want to use a VR headset while editing, use the supported VR headset and install the necessary software. For more information, see Configure Head Mounted Display for immersive video in Premiere Pro.

Premiere Pro offers support for viewing VR video (both 360° or 180°) in the Monitor panels. It also detects if the clip or sequence has VR properties and automatically configures the VR viewer accordingly. You can publish VR video directly to the web from Premiere Pro to sites such as YouTube or Facebook.

Premiere Pro can detect if the clip or sequence has VR properties and automatically configures the VR viewer accordingly.

To determine if a clip has VR properties assigned to it:

You would want to interpret the VR footage when:

To assign VR properties to a VR sequence, select Sequence Settings > VR Properties, and then do one of the following:

To create a sequence that includes the VR properties, select New Sequence Settings > VR Properties, and then specify the VR settings.

When sequences have VR properties associated with them, they are viewed in either the Source Monitor or the Program Monitor. The Monitor Settings menu shows the available options for VR Video available (not dimmed out). 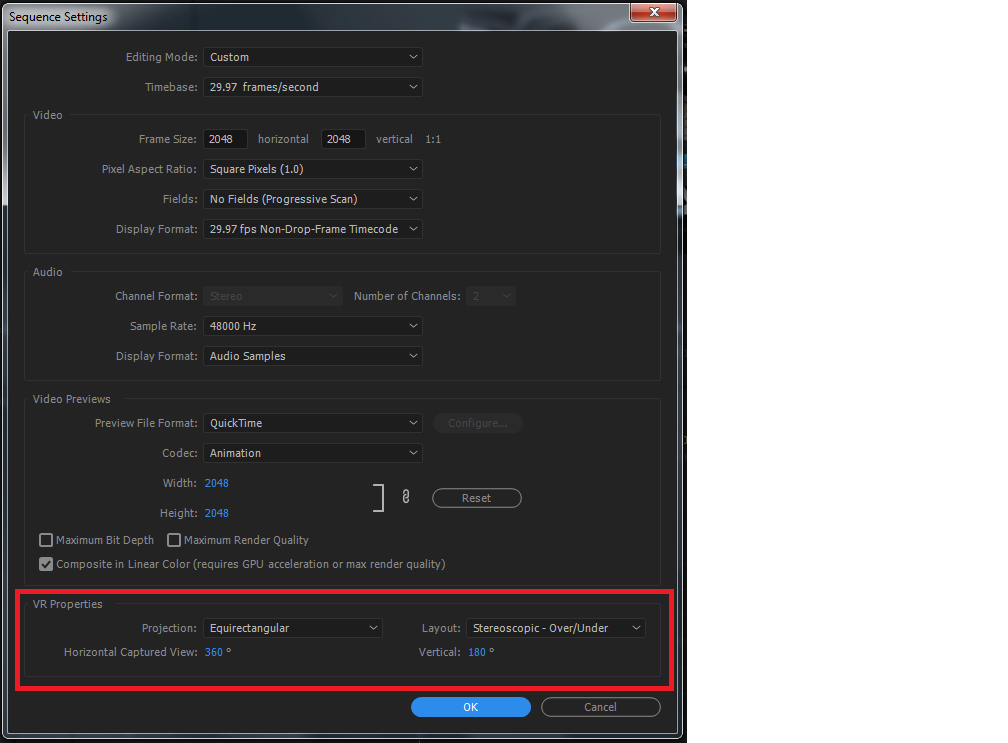 The VR view available in the Source and Program Monitors displays scroll bars and hot-text controls for changing pan and tilt, along with a dial that supports continual pan of the VR view. You can also turn off the display of these controls if you want to maximize the video display area in Source and Program monitors.

Select Track Head-Mounted Display to link the VR view in the monitor to the view that is seen in a head-mounted VR display. This option gets highlighted when you install a VR headset along with supporting third-party plug-ins such as Mettle for Premiere Pro. Otherwise this option is disabled.

The VR properties on clips and sequences are automatically configured in Export Settings when the export Format is set to H264, HEVC, or QuickTime. You can view these Export Settings in the bottom of the Video options in the VR Video section. You can also change the settings here.

Use the dial at the bottom for 360-degree continuous panning, which indicates the direction of view.

To center the view, double click within the video frame. Use either of these methods to change the view interactively during playback and while the video is paused. To return to the normal monitor display, open the Monitor Settings menu and deselect the Enable option for VR Video.

To toggle between enabling and disabling your VR Video display use the button which can be docked with the monitor’s playback buttons. To open the button editor, click the up arrow available the lower right corner of the monitor. Drag the Toggle VR Video Display button out of the editor and move it into the monitor panel to the desired location. This button helps toggle between the normal monitor display and VR Video display.

Here is a list of the effects and transitions that are available.

All immersive video effects and transitions can automatically detect VR properties in a clip.

You can also mix and match different resolutions and stereoscopic/monoscopic layouts in the same sequence. When you mix various equirectangular VR clips into a sequence, some match the resolution and match the stereoscopic layout while some do not. Use the VR Projection effect and choose the appropriate layout and video to properly fill the frame. In addition, you may need to correct the zero angle because of improper camera placement or subject matter focus. You can correct this by choosing to rotate the video using pan, roll, and tilt controls.

You can also play this rotation back in real time, when doing this ensure that GPU acceleration is turned on. 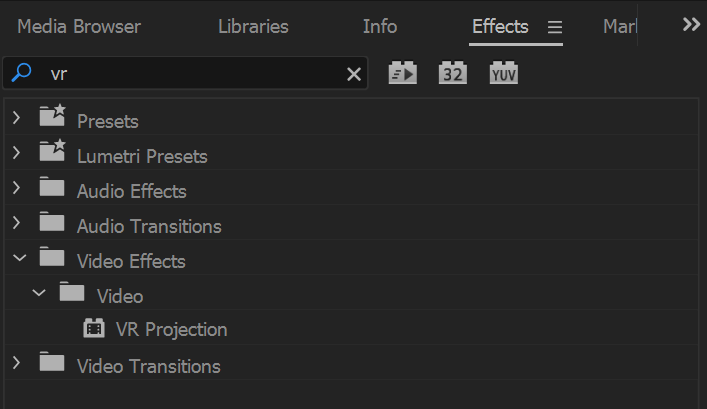 Used by enthusiasts, Ambisonics is a full-sphere surround sound technique that allows users to cover sound sources above and below the listener in addition to the horizontal plane. Unlike other multichannel surround formats, its transmission channels do not carry speaker signals. Instead, they contain a speaker-independent representation of a sound field called B-format, which is then decoded to the listener's speaker setup. This extra step allows the producer to think in terms of source directions rather than loudspeaker positions, and offers the listener a considerable degree of flexibility as to the layout and number of speakers used for playback.

You can use Premiere Pro to import Ambisonics media and accurately monitor it spatially using a pair of headphones.

You can also reorient both the video and audio spheres to the appropriate spatial location.

There could be a delay after the uploading gets completed before the video is playable in VR mode.

Learn how to work with VR media directly, including stereo media, so you can edit sequences, apply special effects and output 360-degree projects tagged properly for media players.