Premiere Pro provides a set of captioning features that let you edit, create, and export captions in all supported formats.

You can import and display closed captions. You can also edit the text, color, background, and the timing. Once you are done editing, you can export the closed captions files as a "sidecar" file, embed them in a QuickTime movie or MXF file, or burn the captions into a video.

Premiere Pro also supports importing open caption files that can be burnt in as subtitles. 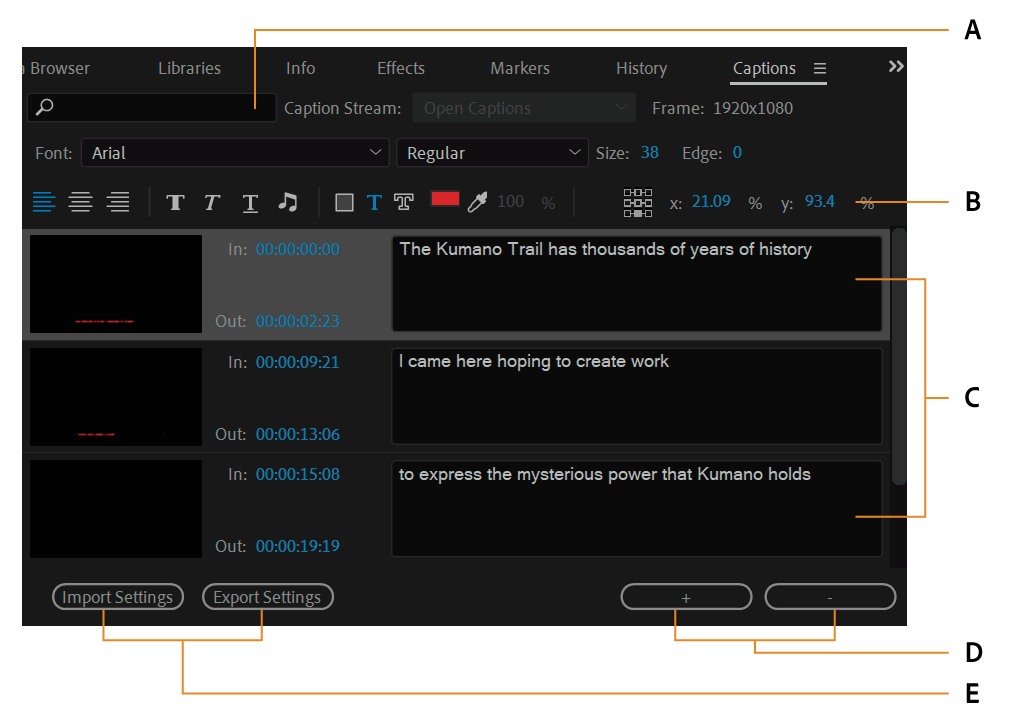 You can create captions in Premiere Pro. You can add text, apply formatting, and specify position and color. For more information, see Add and edit subtitles and captions.

When you import caption clips into a project, the captions are displayed as caption blocks in the Captions panel.

To display the captions in the Source or Program Monitor, do one of the following:

Displaying closed captions in the Source Monitor and Program Monitor

Consider a scenario where you have a program that already contains closed captions. You may need to create a different version of the program, with a shorter duration.

To edit a caption file, do the following:

You can define default settings for export by customizing the settings of a caption before you export it. They are used as defaults in the Captions tab of the Export Settings dialog box, under the option Create Sidecar File. You can overwrite them during export if you want to.

To set default export settings for a caption file, follow these steps:

You can import media containing embedded captions just like you would import any other media by selecting File > Import or by importing through the Media Browser. Premiere Pro imports the embedded closed caption data automatically into the project.

To detect and automatically import embedded caption data in a media file, select the Include Captions On Import check box under the Media section in the Preferences dialog box. 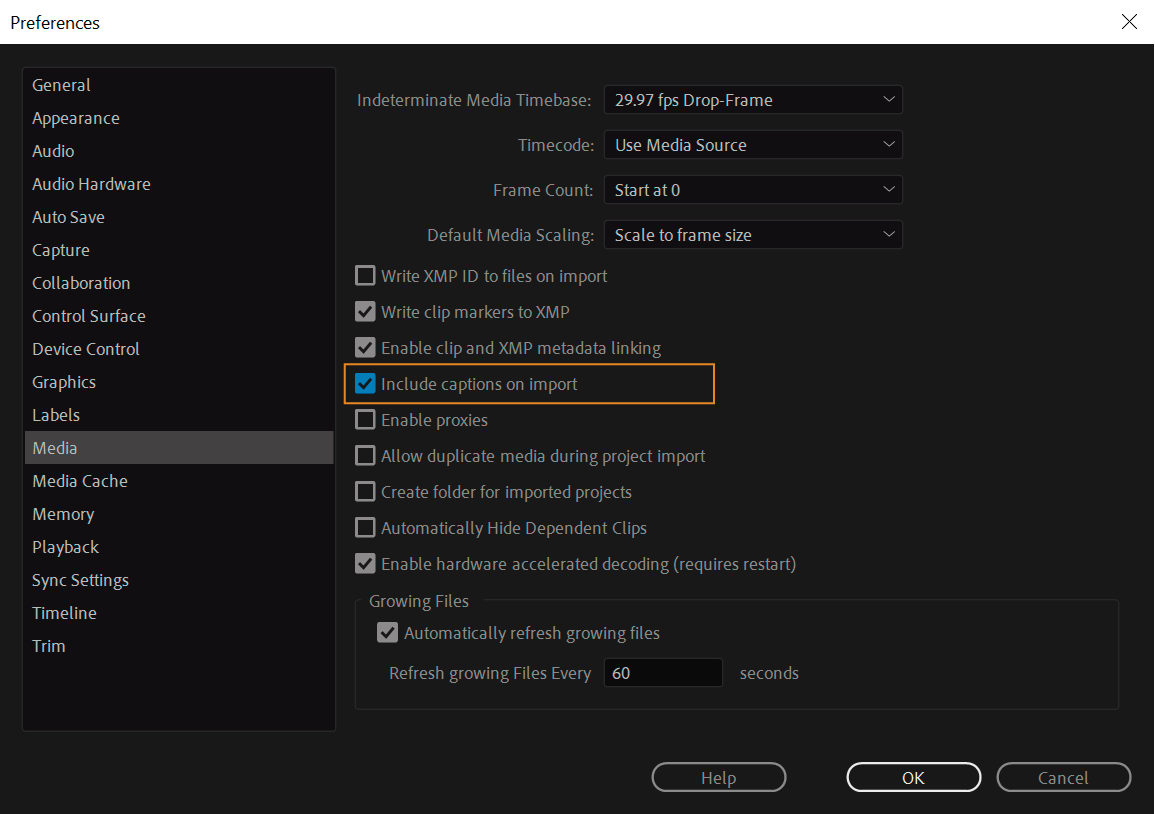 While exporting, you can choose to keep the captions embedded or split the captions into a separate sidecar file.

“Wired” movies have hyperlinks embedded in the video. You cannot create “wired” movies on Premiere Pro.

When you import SRT files and XML files that  have open caption data in them, Premiere Pro automatically converts these files to CEA-708 CC1 closed caption files. You can then edit these files and burn in the captions as subtitles while exporting using Premiere Pro or Adobe Media Encoder.

You cannot edit captions that are burned into the video.

If you are using any third-party captioning applications to create captions, here is a typical workflow that you can follow:

Step 1: Export the sequence to a third-party captioning application

After you complete the video and audio editing in Premiere Pro, you export the sequence as a reference movie to a third-party Captioning application.

When you import a Closed Caption sidecar file into your project, a video-only clip is created containing the Closed Caption text blocks. You can make any further adjustments to the text blocks to keep it in sync with your media, as required.

For XML files, besides viewing the captions in the Captions panel, the captions are also viewable from a text editor.

Premiere Pro supports embedding into and decoding from the following file formats:

Premiere Pro allows editors to create Open Captions, also known as subtitles, which are captions burned into the video stream (as opposed to Closed Captions which can be toggled on or off by the viewer). Users can create Open Captions or import caption formatted XML and SRT files. In the Captions panel, you can create caption blocks, add text, and change the text formatting (color, size, position, and background color).

You can convert single stream sidecar and embedded single stream files to Open Caption in Premiere Pro. It includes embedded MOV and MXF caption files. Using the value area next to Size you can make changes by mouse-down right/left interaction, or numerical input.

If you're exporting a video that contains Teletext or Open Subtitling captions, you could set the metadata to sidecar .stl files so that the created sidecar file contains the wanted information.