The 2017 release of Illustrator CC is now available! See the New features summary.

Now export individual artwork or entire artboards to various file sizes and formats in one click of a button. Suited well for mobile and web workflows, the feature ensures that your time is spent on getting the design right, and not on manually repetitive export workflows. 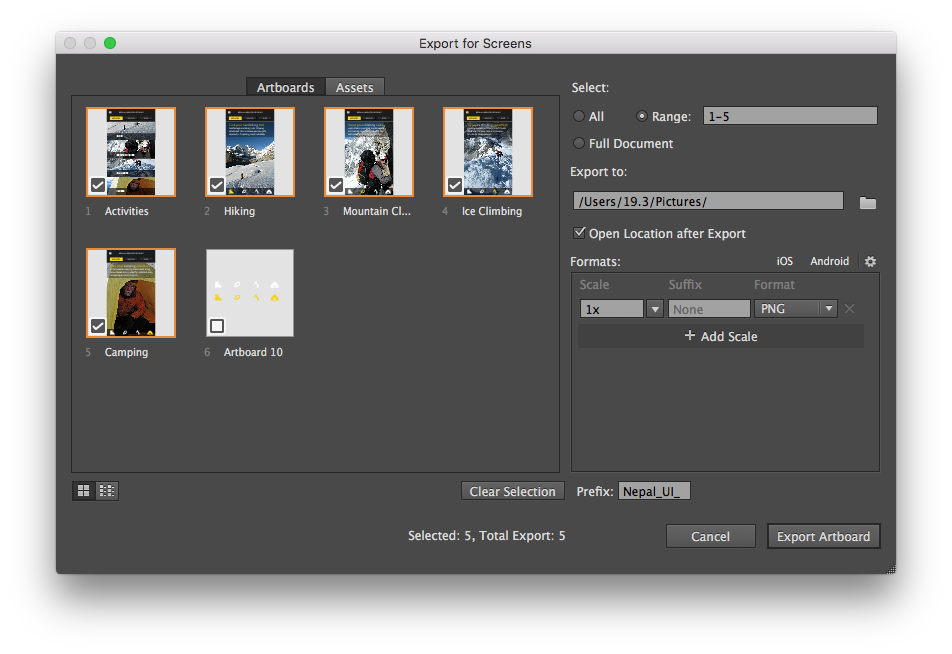 The Export for Screens dialog.

For more information on this enhanced feature, see the section on Collaboration in the article Collect Assets and Export in Batches.

Do more with Live Shapes

Live Shapes have been enhanced to make your workflow easier, and also in response to feedback received about the way users interact with different shapes. Some notable changes are:

For more information on the enhanced tool, see the article on the Live Shapes.

Libraries have been enhanced to provide more control while collaborating with other users (read-only Libraries), and even deeper integration with Adobe Stock (now featuring 50+ million assets).

Larger Libraries Panel. On computers that have screens wider than 1680px, the Libraries panel opens in a larger form, stretching vertically along the right corner of the screen.

Now available in all language versions of Illustrator

Now search for your assets across libraries and Adobe Stock. Work with your existing or older colors by importing color swatches and groups. There's better support for your paragraphy and character styles in libraries, for more creative control over your text, too.

Convert your natural, free-flowing gestures into perfect geometric shapes. And then use them like regular shapes - combine, delete, fill, and transform them - to create editable designs. You can use the Shaper tool in both - the traditional workspaces and in the touch-optimized Touch workspace.

For more information on this new tool, see the article on the Shaper tool.

More of the Illustrator Shape tools are now fully live, interactive and dynamically adjustable, so you can quickly modify and enhance traditional vector shapes without having to apply special effects or use other tools.

For more information on this enhanced feature, see the article Live Shapes.

Symbols can now share a master shape but be modified to have different appearances such as stroke, fill and opacity. Scale, rotate, mirror and skew them without having to break the link to the parent symbol.

For more information on this new feature, see the article Dynamic Symbols.

You now have the ability to align and space objects using the enhanced Smart Guides in Illustrator CC 2015. Check the new hints to draw perfect shapes like squares and circles without using control keys and modifiers.

A new SVG Export workflow (File > Export > SVG) is available to export web-optimized SVG files for your web and screen design workflows. You can also choose to export individual objects versus the entire artboard.

For more information on the enhanced feature, see the section on the web-optimized SVG export options in the article SVG.

The Touch workspace for Windows tablets adds the Shaper tool, new Live shapes, enhanced Smart Guides, an option to easily zoom when using a mouse and support for HP Sprout.

Use an iPad, iPhone or Android phone to turn any image into a production-ready asset. Extract a color theme or create a brush, shape or vector graphic, and then save the asset to your Creative Cloud Libraries to use in Illustrator.

Create freeform vector designs on your Android phone with the Adobe Illustrator Draw app, and then send your work to Illustrator on your desktop to refine it further.

Now you can use Comp CC to explore layout possibilities on your iPhone as well as your iPad. Assets in Comp can be linked so when you edit them in Illustrator or another Creative Cloud desktop app, they'll instantly update in Comp.

Recover data in your files

Graphics in Creative Cloud Libraries are now linked, so that when they’re changed, you and your team members have the option of updating them across any Illustrator, Photoshop, or InDesign projects where they’re used. Adobe CreativeSync powers your libraries and keeps everything up to date and right at your fingertips for a seamless workflow. All your projects are always up-to-date with your latest edits! 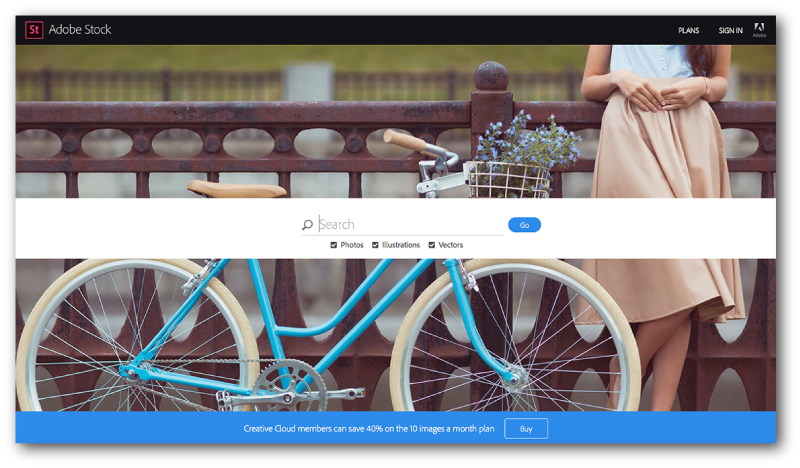 With Adobe Stock, you can purchase, access, and manage high-quality, high-resolution, royalty-free images directly from Illustrator, Photoshop, InDesign, and other Adobe desktop apps.
You can save images directly to Creative Cloud Libraries. You can license an image immediately, or save a watermarked preview to use in a comp. Thanks to Adobe CreativeSync, you can immediately access your images across your desktop and mobile devices, and even share them with your team. When you're ready to use the non-watermarked version, you can license the image for use directly in Illustrator.

Pan, zoom and scroll up to 10 times faster, thanks to Mercury Performance System enhancements that brings GPU acceleration to both Mac and Windows.

Zoom is now animated, so you can quickly zoom in and out of your document by scrubbing left and right. You can also click and hold the Zoom tool over a spot to dynamically zoom in.

Watch this video on the performance enhancements in Illustrator CC 2015.

Work with greater precision and make accurate and exact edits with the new 64,000% zoom level. Previously, the maximum zoom achievable was 6,400%.

Safe Mode is a new feature that enables Illustrator to launch even if there are fatal, crash-inducing files (for example, corrupt fonts, out-of-date plug-ins, or incorrect drivers) in the system. You can choose to diagnose the cause of the error. When the application starts after isolating and disabling crash-causing files, Illustrator is in Safe Mode. 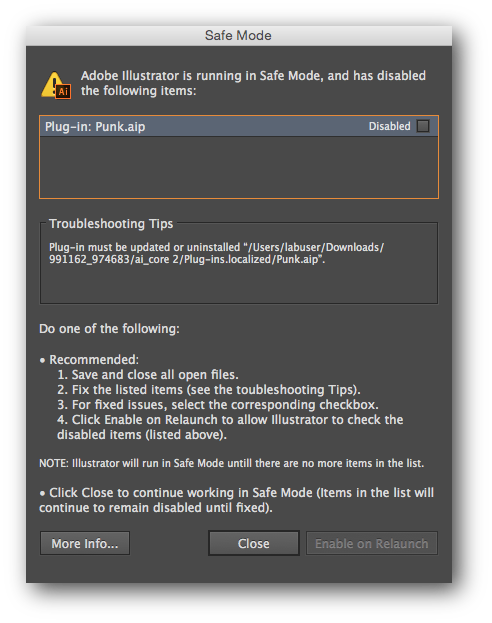 The Safe Mode dialog provides you with information to diagnose and troubleshoot the problem area, thus providing you with a way to fix any issues. When done, mark all issues resolved and enable Illustrator to relaunch in normal mode at the next restart.

When such an error occurs, simply relaunch Illustrator and your work can be restored. If the cause of error is a damaged font or incompatible driver or plug-in, Illustrator provides you with options to diagnose the issue and fix any errors.

For more information, see the article on recovering document data after a crash.

Illustrator no longer requires you to be at your studio or office to be creative and productive. Keep your ideas, discoveries, and thoughts constantly evolving and rapidly developing into awesome artwork and projects – all while on-the-go – using Adobe’s mobile apps. A few examples:

Adobe Comp CC. Pull creative assets into Comp from your or your team’s shared Creative Cloud Libraries, then instantly send your layouts to Illustrator. All your text, images, and graphics are live and fully editable.

Comp for iPad is available as a free download through the iTunes App Store.

Illustrator Draw. Create with your favorite vector drawing tools and features in a streamlined, modern interface. You can draw lines, shapes, and free-form illustrations and with ten drawing layers and a photo layer. Creative Cloud connectivity makes it easy to apply finishing touches in Illustrator or Photoshop.

Draw for iOS (iPhone, iPad, and iPad Mini) is available as a free download through the iTunes App Store

Adobe Shape CC. Photograph any object, design, or shape - and convert them into vector shapes in a few simple steps. Store the resulting vectors in your Creative Cloud Libraries, and access them or refine them in Illustrator or Photoshop.

Shape is available as a free download through the iTunes App Store.

Adobe Brush CC. Use your iPad or iPhone to design beautiful, high-quality brushes from photos of anything that inspires you. Save the brushes to your Creative Cloud Library and access them anywhere across Photoshop and Illustrator!

Adobe Brush for iOS is available as a free download through the iTunes App Store.

Adobe Color. Capture inspiring color combinations wherever you see them, in a fun and intuitive way. Simply point the camera at something colorful and Adobe Color CC will instantly extract a series of colors.

Color for iOS (iPad, iPad Mini, iPhone, and iPod Touch) and Android is available as a free download through the iTunes App Store.

This feature is no longer available in Illustrator v19.2 (November, 2015) and later.

Creative Cloud Charts (Preview) was introduced in the June 2015 release of Illustrator CC as a technology preview to gather real-world feedback from customers on the new service. Based on customer feedback, the Illustrator team has decided to pause Charts and revisit the design of the feature. The Charts preview won’t be included in Illustrator with the November 2015 release.

After November 30, 2015 when an Illustrator document containing a chart is opened, the Chart will be converted to standard Illustrator vector graphics. Customers who have Chart data they would like to save will have until January 15, 2016 to visit the Creative Cloud Charts service and copy the chart data to a spreadsheet that can be saved to their desktop. Please refer to the Creative Cloud Charts FAQ for more information.

Leverage the power of your GPU! Now for Macs, too!

The 2015 release of Illustrator CC now better leverages the power of GPU to render content — which means faster artwork rendering during zooming, panning, and scrolling. Each art type has been rewritten, so that it is computed and rendered on the graphic processor. GPU enhancements are now available for Macs as well.

Image Place
You can now place an image (raster format) in the Touch workspace.

Distribute Options in Align Panel
Previously, the Align panel did not have distribute options. Now, users can use the two most popular align options from the align panel in the Touch workspace.

Tools reset
Some tools in the Touch workspace have options like Draw from Center in Shape Tools, Merge and Subtract Mode in Shape Builder. When switching between tools, one often forgot that an option was enabled when the same tool was used previously. This affected productivity. Now, whenever there is a change of tools in the Touch workspace, the active tool becomes available with the default settings.

Joining two paths
The Curvature tool only worked with one path at a time - the active path. Now it is possible to join a non-active path and continue working with it.

Start from either ends
The Curvature tool had a fixed direction of working - even when a path was deselected and reselected. Now for any open path, users can pick which end of the path to start working with. To be able to draw from the other end-point, press Esc to deselect the active curvature point, click and move the end-point slightly, and then continue drawing with the Curvature tool.

The Shape Builder tool previously had linear feedback for Merge and Subtract options. Now, this tool can be used in free-form mode. This mode is on by default. To get back to older, straight-line feedback, change the option in the tool's options dialog. This is available in the Touch workspace as well.

Although most users loved auto-close in Pencil Tool, there were some users who required path closure to occur at their own discretion. The Pencil tool options dialog now has an option to control auto-closing.